In this recession, it’s important to invest heavily in yourself.

I want to make the argument that by taking steps to learn about Linux, and using it at home, you are actually investing your time by making a good investment in solid skills and that you will gain perspectives that will help you for the future.

For people without any experience using Linux, starting out at this day and age gives you the opportunity to learn a heap of new skills very quickly.  Changing your environment, changing your applications and the tools your use have a huge effect on how you’ll think about using computers.

It’s very similar to changing from Windows to Mac, but as you’ll see Linux is a unique experience all of its own.

I’m not saying it it’s a heavy but important investment to learn Linux. Learning Linux takes no time at all, and within an hour of having a system up and running, you’ll have already gotten used to using your system for work, for fun, and for learning.  The opportunity is to use Linux to accelerate the learning different skills and methods that are impossible to get by staying inside the same environment and in your safety zone whether it be OS X or Windows.

Here are 6 ways using Linux can quickly provide a return on your time.

Understand The Foundation Of The Web

A large part of the servers and websites on the Internet run on something called LAMP . I’ll let Wikipedia break the acronym down:

The acronym LAMP refers to a solution stack of software, usually free and open source software, used to run dynamic Web sites or servers. The original expansion is as follows:

On Linux, turning your computer into a LAMP server is a really simple task.  Having an appreciation and some experience with these terms, how they fit together, and how they enable so many powerful websites to run smoothly is priceless.

You can understand what it means when people say Twitter is down… But you won’t be able to appreciate what it means, or understand where the Internet as a whole is moving until you know what’s at its very core.

From a business point of view this is important to understand because technology is alive as any other social application out there.  If Twitter says its migrating its code over from Ruby to PHP, to some people that tells them a lot about how Twitter’s speed and stability are going to be changing.

Info like that is good to know.  Linux gives you a very easy way to get your hands dirty.

“Under Linux there are GUIs (graphical user interfaces), where you can point and click and drag, and hopefully get work done without first reading lots of documentation. The traditional Unix environment is a CLI (command line interface), where you type commands to tell the computer what to do. That is faster and more powerful, but requires finding out what the commands are.”  — from man intro(1) 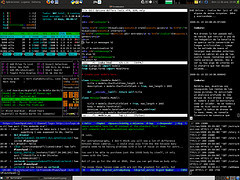 30 years ago people could only ever use computers by looking at at terminal, or the command line.  As time progressed people developed graphical ways to present data to users, and eventually to let them run multiple applications at the same time.  More recently, people have put attention on Usability and design – while others have been trying to develop 3d graphical effects that melt your eyes…

But as much as graphical interfaces make using computers for 16 hours a day easier to endure, they also place limitations on us.  They require more system resources to run, we can only do what applications let us do, sometimes doing what we want to do is generally slower.

Programming is more than C and Java.  If you only picture programming as C and Java, then when it comes time to try programming, the over head involved in learning is horrendous.  Thankfully Linux gives you very easy access to scripting languages that make programming a lot more easy and more fun.

Python, Ruby, and PHP are dynamic languages and are all much better places to start learning programming than C or Java.  And as other people have said, learning to program can be one of the most important skills to learn as it’s a gateway into understanding different ways to thinking about problems.

C and Java both have their place, but for almost anybody who want to start learning how to program, Python and Ruby specifically will help you get started and learn the fundamentals much faster.

The default repositories for Ubuntu (a set of listings of applications you can choose to download and install absolutely for free) for example, gives you instant access to 1000s of different applications. While a lot of them are older and not very helpful, there are also some of the most useful applications available that are are just awesome.  I’ve listed before some of my favourite new applications that were included in the Intrepid Ibex release of Ubuntu.

You can find tons of blog posts, or Linux magazine articles comparing the various free and open source accounting applications, office suites, graphical applications, etc…  As you spend a bit of time with these different applications you’ll start to see that some of the open source applications are so good, and of such high quality, that it’s just sad when people on Windows are paying money for bad software.

On Linux you have the freedom to try out software for free, whenever you like.  You have the option to experiment and try different tools and different ways of doing things.  Having all that access to applications sometimes even makes pursing a long time interest immeasurably easier to start – the repositories have it all.

I guess I should mention that included in this long list of available free software are:

Small or medium businesses can run on this software without a doubt.

Learning how to use Ubuntu is a non-issue.  It’s completely turn key.  The only real issue people have from moving from Windows to Linux is a comfort zone issue.

Increasing your comfort zone when it comes to technology and applications is a big advantage to have.  It takes users from the “I’m afraid of Excel” level to the level where they see every just as applications.  Applications are nothing to be afraid of, and there’s a big opportunity to being able to quickly pick up software.

For most of the jobs I’ve interviewed for there was always some software I had never heard of or used.  But by being able to show that to me, using new applications is something I do on a weekly basis (as I like to experiment), whatever the job needed I was comfortable and confident enough that I could pick it up quickly.

People naturally like to connect with other people like them. I can’t count how many times I’ve seen people randomly start talking to my friend after he pulls out his new MacBook Pro because of them being big Mac people as well.  That does happen with Linux, but that’s not the strong point when I talk about Social Opportunities.

The real social opportunities that come up from the fact that you’ve used Linux is when you can develop a meaningful relationship with somebody because of shared experience and perspectives on Linux.  Linux is so much more than just software in the grand scheme of things, that gives you a lot of opportunities to have opinions, ideas, and points of view.

What you can get out of using Linux for only a short amount of time it points of view on:

You don’t have to know everything, but having at least some experience with Linux and being able to participate in conversations will help you extend your personal reach.

Why it matters?  Because Linux Is Reaching Critical Mass

“The critical mass has been reached, and it’s time everyone tried Ubuntu.”
“If I had a small or mid-size company, I’d probably use only Linux and open-source software…” – John C. Dvorak, PC Magazine

These quotes aren’t rare anymore.  More and more Linux is becoming a mainstream idea.  The more you have experience with Linux, the better positioned you will be whenever the topic of it comes up, whether in a business context like in an interview or a meeting, or social gatherings or meetups.

It’s getting too big to ignore.

Oh, and Ubuntu will ship you free cds of Ubuntu on request.

There’s a lot of discussion to have on this topic. What have you learned since using Linux? What do you think there is to learn from Linux?